I already know how to dance but…

Hello again true believers, I just finished doing some dance practice and am now sitting down to write another blog before I take Macho to play. A funny thing was said to me which I’ve heard a million times since I started dancing and teaching but never paid much mind to until recently. Some new students have come in the door with a certain air of confidence while proclaiming that they already knew how to dance, they just wanted to be more formal about it and take classes for a bit.

Now, in no way shape or form am I suggesting that there is bad intention from these good people, but I find it odd and presumptuous that they come in saying they can already do something and are coming in to ‘brush up.’ I am of Latin descent and I grew up in what I would imagine to be a very ‘Mexican-like’ household because my momma would listen to Juan Gabriel, Los Trios, Nelson Ned etc. In other words, Salsa/Mambo/Cha Cha/Tropical dance was nowhere to be found in my own upbringing. As an aside, I haven’t really tried, but now that I think about it, I’m probably really good at slow dancing. 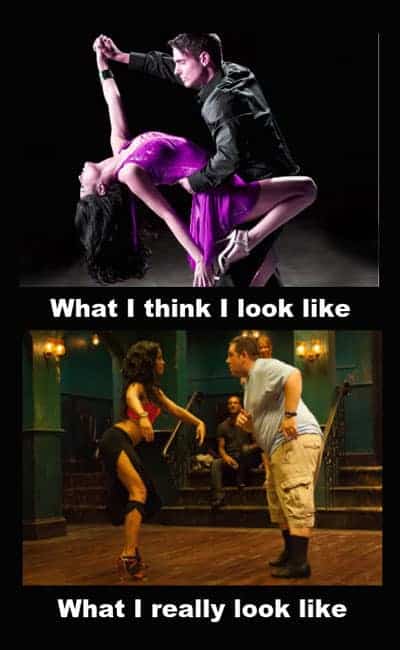 I digress. I didn’t grow up with Tropical music, but what about people who have? Do they have some extra insight or access to some source Latin energy that the rest of us don’t have? I would imagine there are some advantages to having been raised unconsciously training your ears but does this have anything to do with an ability to dance? In my humble opinion, I would say no.

Here’s why. If we agree to communicate in a specific language such as Spanish, I can’t just randomly spout slang and gibberish and expect to be an effective communicator. I know this first hand because I grew up speaking mostly Spanish but was never FORMALLY trained in grammar and reading. This puts me in an awkward spot because I speak like a 10th grader and read like a 3rd grader. Am I fully effective then at all aspects of communication in Spanish? Hell no! Can I hold my own? Sure, but holding my own is different from being good at something. I could easily see the need for going to school to speak way better Spanish and learn to articulate more complicated thoughts as there is a limit to my grammar.

What does this have to do with dancing? I think people who grew up with tropical music have an edge on hearing the rhythm of the music. They might even have a natural swag to their movements. Furthermore, there might also be a lack of inhibition towards dance because it was a part of growing up. These are positive things, yes, but not really related to dancing more systematically. And no, mom dragging you around while listening to ‘La India’ on repeat doesn’t count.

It’s important for me to respect the language of Spanish and be mindful of my limitations and it’s equally important to do the same for dance. I’m not one to say that people ‘aren’t dancing’ if they are technically sound, but coming into a dance studio supposes that you have an intention to learn more formally. Yes, even street style can be formal when there are specific rules and movements at play.

If you haven’t gathered by reading my online ramblings, I sincerely believe to the core of my being that leading and following are an art-form. Two people moving in harmony with each other and the music in artistry in motion.

I personally think it’s great that people grew up listing to Salsa, Bachata or any other type of music that has a popular dance attached to it but I also think you should respect the idea that dancing and listening are two mutually exclusive things. I know that since I have learned how to dance that it’s a learned behavior and can be given to anyone who wants to receive it.

Strap on your dance shoes mi gente of all races and walks of life and come in with a clear and humble mind that this is a new journey to embrace. Start learning to dance with receptive mindset which will allow you to focus and pick things up so that you can dance with others. Once you actually get it, you’ll not only become an effective dancer and communicator, you’ll also be able to add your natural swag to your moves!

Did you grow up with tropical music in your house? How was it like to actually learn to dance a bit more formally?

Tell me about it!