I’ve run across a few people lately who have reminded of something that I find peculiar. I’m talking about people from other dance disciples who come into the Latin dance world and immediately think they know what’s going on as if there was nothing to learn. What sometimes makes it hard for our dance community to be taken seriously is the lack of codification and standards that we all agree upon. I get that. While I don’t see that changing anytime soon, I do agree that there are things that are common to the scene and plenty of concepts and ideas to learn if you choose to explore ‘street style’ Latin dance. It’s quite expansive when you get into our style of dance.

Nowadays, I even hesitate to call it street style because of the growth that has happened over the last 15 years. I vividly recall watching old VHS tapes from a guy named Arthur who went to Congresses when they were held. Mind you, they were a much bigger deal as there were considerably less events that we have in the present day. When I started dancing more actively, I would constantly hear of three major congresses of note and those were in New York, LA and Puerto Rico. This was the first glimpse I got that there was more to this Latin dancing thing than I was seeing in Chicago. Watching those old tapes now lets me know how far we’ve really come. It’s quite amazing.

So you can imagine how I would feel if I met someone who thinks because they are versed in a classical style that they have a lock on ‘street style.’ If you’ve ever heard the expression, I almost think they feel like they are ‘slumming’ when they come into our community. As a lover of dance, I infinitely respect all forms of movement and it has never crossed my mind that my ability in Latin Dancing gives me an edge in something else. I simply take it as learning something new.

So what gives? Why do some people of other disciples come into our scene and think their poo poo doesn’t stink? Let’s establish something right off the top, being good at dancing a particular style means you have discipline and are well versed in MOVEMENT. The fact you dance a style just means you’ve chosen to focus that movement in a certain way. Now, doesn’t this give you an edge over someone who has no dance training whatsoever? Of course!

Being coordinated for dance is a huge step in picking things up quickly and progressing faster than if you had to start from scratch so let’s make that perfectly clear. That being said, does making Sushi immediately make me well versed in constructing a perfect burrito? I think not!

Who are these people? 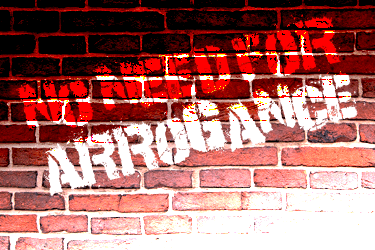 A while back, Laura and I were doing some preliminary meetings with people to see if we could set up some children’s’ classes. While the city’s red tape prevented it from coming to pass, we did start the process of interviewing some potential teachers. We met the same person over and over again dressed up in different clothes and with a slightly different story. The one similarity was the answer in regards to their skillset.

“What kind of dance do you do?” we would ask.

“Oh, I do everything!” they would say.

“Really? You do Ballroom or Partner dance?” We would ask.

No joke, this happened at least seven to ten times with different people. It struck me as odd because while those disciples are incredible and deserve respect, there is no focus on partnering. More specifically, partnering where the interaction with another partner is the main focus of the dance. Make no mistake, partnering the way we do in Latin dance is an art. It’s detailed, specific and takes time to learn. In the same way a Suzy Q gives me no edge in executing a Tendu, a pirouette gives me no edge in performing a spot turn with my partner either.

It goes both ways. There isn’t a war here just an understanding that these are two different languages. In truth, the interviews I discussed earlier meant no harm or disrespect, but there have been others who come in with an air of arrogance that is unnecessary and short sighted. On the contrary, there are so many who have taken a stance of respect for all movement and see Latin dance as something new and exciting. Laura and I have been fortunate to have a great working relationship with the Giordano Dance Company of Chicago. We actually set a piece of work on the company and go in periodically to take a look and help them brush up on their skills and style. Without fail, it’s mutual lovefest as we all are happy to see one another and we all admire and appreciate what we bring to the table. Can I touch my knee to my forehead? Hell no, but I can also move my body in a way that is equally impressive in a different way. It isn’t a contest and there is no competition, we are all sharing information and can create goodness together.

As an elder statesman here in Chicago for our Latin Dance community, I welcome people from other dances into our scene. As a matter of fact, i extend my arms to you all and hope to make your acquaintance and friendship and hope to share what I have learned and benefitted from in my years training in Latin dance. Conversely, feel free to share your skills and stories with me as it can only help me to become a better version of myself. The thing you’ll discover as you fall in love with Latin dancing is that it’s open for your interpretation like Hip Hop. You know, take a classical song and loop a musical phrase and top it with a slammin drum beat and it’s magically Hip Hop. SO too can you take your outside training and transform it to develop your own style of Latin dancing. Try it!

We should all mutually respect each others movements and styles the same way we respect different cuisine that we eat of different languages that we hear. In the end, what we’re really working on is how to communicate our inner passion with movement, no?

Have you met people from other dance disciples who are cool? Not so cool? Tell me, let’s chat about it. Make sure to like and share this and other posts you’ve read and comment away!

Until next time, to your dancing…