I was out at a slamming Salsa night, and things were wrapping up. I reached out and decided to meet up a non-dancing friend at a ‘non-dance’ club. While the Latin dance scene certainly has it’s pluses and minuses like any communal gathering, I’ve found it to be head and shoulders more fun than the alternative.

I suppose that the following could apply to any dance scene and not specifically to Latin dancing, so please keep that in mind. When I walked in, I immediately was taken aback. People here were exquisite looking! It isn’t that we don’t have plenty of lookers in our community, but this was different.

I value my brain cells, so I don’t ever watch Kim Kardashian’s shows. That said, this place looked like her nightclub fantasy. The ‘beautiful people’ were everywhere, and the music was mostly commercial with some noise that I think has become the evolution of House music (Where did the soul go?). I remember feeling a bit awkward as I walked in regarding my choice of clothes. It’s at this moment I realized that my clothing choices are based on whether or not they look good and are good for dancing.

I didn’t look bad mind you, just a bit ‘Salsa-fied.’ So that lasted about a minute, and I settled into my groove and found my friend. We hung out for a bit and then I noticed something dramatic.

These mofo’s DRINK. There were tons of people just hanging around the bar and mostly young 20 something girls were standing around waiting for men to buy them drinks. Most dance events are dramatically different. Many times the scene is filled with cheap asses who actually bring their own bottles of water to not donate whatsoever to their hobby or venues which support their hobby, but I digress.

I saw plenty of hundred dollar bills being thrown around casually and realized that this particular nightclub revolved around alcohol.

Then, I almost fainted. I realized there wasn’t a dance floor. Yes, people were trying to dance in the nooks and crannies of the venue but the majority if what traditionally would have been a dance floor was taken up by the ‘VIP area.’

So I walked in to see what the big deal was and was quickly shoved aside by a what appeared to be a wall which I soon realized was a person. He, not so politely, informed me that I wasn’t allowed there unless I had ‘a table.’

“How much are the tables?”

“About one thousand for 2 bottles.”

Sweet spear of Poseidon, what has clubbing come to? Have people become so enamored with the false imagery of rap video’s and celebrity worship that they are blowing their weeks pay on A TABLE? I soon realized that the patrons who couldn’t afford a table in the VIP area were the ones on the perimeter. They gazed with a trickle of jealously at the glamour and prestige that comes with sitting at a big table like a child looking on while grownups get together.

This is madness I tell you. It’s not so much that they were all there, it’s that they have been sold this idea that this is how you go clubbing in 2015. To have fun 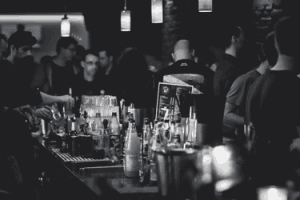 there had to be some kind of posturing to present yourself in a way that may or may not be genuine. There were many awkward social interactions that I witnessed as men used alcohol to lure women in and the ladies ate up the attention. Admittedly, people looked sharp and sexy but there was a quiet sense of desperation in the room as I looked at the whole scenario.

Outside of a few people who had a few too many drinks, it didn’t look like people were having FUN. Fun like the dance set that I had just left hours beforehand. People were much more interested in being seen than being inspired. The few who attempted to dance with each other weren’t even engaged at the moment as they needed to maintain their image. I can’t or won’t make the blanket statement that most people who patronize these venues aren’t enjoying themselves. I’m not the dictator of fun in any sense. However, I do feel that many of these particular club people would be in shock as to how much more fun they could have partner dancing. I am of the opinion that it’s a primal thing we have inside of us that moves us to move. I welcome any and everyone to try out another avenue for fun and see the difference for themselves.

I stayed to hang out with a friend but left after about 2 hours. I didn’t hate the experience, I was more dumbfounded than anything. Many times in life you are exposed to something that reminds you to be grateful of what you have. For example, Laura and I often travel to do dance competitions and we are immediately reminded of how spoiled we are to live in Chicago. To say we have great food here would be an understatement. We can get almost any kind of cuisine and often times at late hours. To have this culinary privilege taken from you makes you realize how much you enjoy the honor. I had this same feeling as I left that particular night club.

Our scene, while significant compared to most other Latin dance scenes in the country is still only a fraction of the size of the bourgeoisie clubs that I just spoke about. Regardless, there is a sense of satisfaction and soulfulness that exists on the best nights. The most memorable evenings have me leaving in a pool of sweat and joy that comes from endless engaged interactions with my dance partners. I’ve been through many phases of night clubs and I can say with certainty that the social dance community is far and away the most satisfying.

Funny enough, me and my buddy were hungry after we had a few drinks and proceeded to go to one of our favorite places, Mr. Beef. After we both had indulged in some delicious Italian beef, we were wrapping up when a random guy came in with his friends. As I was getting ready to leave he stopped and asked me:

“Yo dude, do you dance Salsa?”

I would later learn he asked because he had some exposure to Latin dancing and really enjoyed it. He was wondering where to go as I think he was coming from a similar nightclub. I stopped and looked at him, not recognizing the person in front of me. I smiled and responded:

If you enjoyed this blog, please like it and share it with your family friends and pets!